Child falls from windows continues to be a worldwide epidemic

Mark Meshulam is an expert witness for cases of child falls from windows and a window safety consultant. 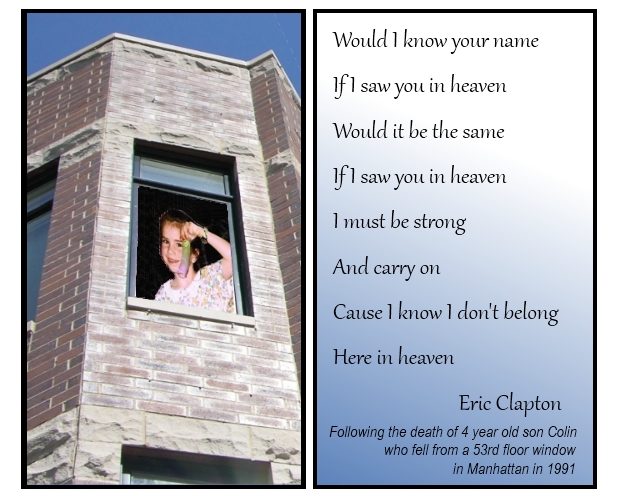 As long as there is gravity and windows it is sadly inevitable that there will be people falling from windows, resulting in injury or death. Unfortunately, most who suffer these window fall accidents are children, and most of these child falls from windows could have been prevented.

A number of studies have delved into the statistics regarding child falls from windows. This study, published in September 2011 in Pediatrics, the Official Journal of the American Academy of Pediatrics, took a new and unique tack. It is a study entitled, “Pediatric Injuries Attributable to Falls From Windows in the United States in 1990-2008” by Vaughn A. Harris, Lynne M. Rochette and Gary A. Smith.

The authors accessed a wealth of data provided by the National Electronic Injury Surveillance System (NEISS), a service of the CSPC, the Consumer Product Safety Commission. NEISS uses data from about 100 hospital emergency departments and extrapolates their results to represent activity at 6100 similar hospitals.

These data are publicly available. You can query the NEISS system for free. NEISS even publishes a coding manual that helps the user inputting search criteria for injuries associated with consumer products such as windows.

The authors analyzed the output from their search by tabulating data for years 1990 through 2008. In this data they searched for and analyzed descriptive language filed in the accident reports. They obtained the normally available data fields such as gender, age, treatment level and injury type. Then they teased out additional data, such as height of window fall, status of the window, presence of a screen, involvement of nearby furniture and even the landing surface. The study generated a surprising amount of data.

During the 19 year study period, about 98,400 children were treated in US hospital emergency departments for injuries related to falls from windows.

.2%, or 197 children, an average of over 10 children per year, died of their window fall injuries. The fatality statistic is unrealistically low because children who fall from windows and die immediately were not taken to emergency departments and therefore were not counted. The true number could be many times that which was reported. The US Consumer Product Safety Commission stated they knew of 120 child window fall related deaths to 1990-2000, which averages to about 11 per year.

Three quarters of those children injured in falls from windows were treated and released. One quarter of children who fell from windows became inpatients.

Injuries increase with the temperature. Incidence of window fall injuries spiked for ages 2-5, then tapered to a lower level through age 17. Age two has especially high injury rates, giving new meaning to the phrase the “terrible twos”.

Gender and child falls from windows

Boys represented 58% of the injured by falls from windows. Thirty eight percent of these injured kids displayed risky behavior such as climbing out of or jumping from a window.

31% of the children fell from a one-story window. 63% fell from a window on the second story. The remaining 6% fell from windows three-stories or higher. Understandably, this last group had a higher percentage of fractures or death as a result of the fall.

83% of the windows had a window screen in place before the fall. The authors state that “Parents and other child caregivers should be counseled not to depend on window screens to prevent children from falling out of windows. To prevent these falls, window guards or window locks that prevent the window from opening greater than 4 inches should be used.”

Window type and falls from windows

4% of window falls involved adjacent furniture that raised the child closer to the window. This number is also low due to low availability of data. Only 5% of the cases had information on this topic. However if you extrapolate the numbers, you could justify a percentage as high as 80% where child falls from windows involved adjacent furniture or other items they could step upon.

The authors conclude: “Prevention measures for young children should aim to prevent window falls by reducing the child’s opportunity to exit the window, through the use of devices such as window guards or window locks and through placement of furniture away from windows, to decrease access to windows by young children.”

The 2006 article “The silent epidemic of falls from buildings: analysis of risk factors”, by Lena Mayer, Martin Meuli, Ulrich Lips and Bernhard Frey studied seven years of emergency department activity at the University Children’s Hospital Zurich. Their results, which include falls from windows and balconies, will have a familiar ring:

Fifteen children (49%) climbed on a piece of furniture before falling from the window. In almost 20% of the accidents dangerous balcony or house constructions led to the fall. In seven accidents (23%) there was a chair, a bed, or bedside table, a sofa or a ledge in front of the window allowing the children to move up.

They also found that child window falls correlated more strongly with “an immigrant family setting” and low socio-professional category of the parents.

Window Guards
The American Academy of Pediatrics has issued a policy statement entitled “Falls From Heights: Windows, Roofs, and Balconies”

The policy points out children older than one year old can not pass through a 4-in opening. As a result of this, most regional code agencies have adopted the 4-in spacing standard.

“In 1976, the New York City Board of Health, noting that child falls from windows accounted for 12% of deaths from unintentional injury of children younger than 15 years, passed a law requiring the owners of multiple-story dwellings to provide window guards in apartments where children 10 years and younger reside. The pilot program resulted in a 35% reduction in deaths attributable to child falls from windows and a 50% reduction in child fall incidents; no child fell from a window equipped with a window guard.”

“The mandatory program resulted in a reduction of up to 96% in admissions to local hospitals for the treatment of window-fall-related injuries. Follow-up through 1993 revealed a continuing downward trend. Recent data on the New York City experience showed no increase in the number of deaths attributable to residential fires (in fact, there was a decrease) after the introduction of window guards as required by city ordinance.”

Recent News at the time this article was written

Are your windows dangerous?